Seems like after finishing the final level, there is no way to return from the Thanks screen that links to the steam and patreon pages. At least I couldn't find one, and i was hoping to replay some of the prior levels!

Heyho, FewKinks!
Haha that's a hint to go to my Patreon and wishlist on Steam :D
Jk, good point, I'll add such a button next update.
Thanks for playing and stay funky,
Dez

what does the skeleton grave on gimotika's level mea

Heyho, Finnik!
The grave with the skull on it has something to do with the skeleton in the top right puzzle!
Hope that helps! Stay funky,
Dez

the skeleton one is too confusing for me

Try to think of the bench as skeleton legs ;)

I seem to only be missing the skeletons left hand not holding the sword, any advice???

Heyho! You might find the swordy thing you need in the shop ;)

yup, it's possible to glitch objects onto other screen segments, i dunno the complexities but by putting the diamond gem on the teleportation pad, and by putting your character ontop of it and alternating between the previous segment and this segment i was somehow able to bring the diamond to the other areas, i even brought it to the shop eventually, i was able to do it a few times before realizing it was a glitch

Heyho, randomguyed!
Thanks a lot for your glitch report, that's very valuable for me. Your description was perfect,  I was able to reproduce it.
I'll look into it as soon as I can.
Have a happy new year and stay funky!
Dez

can you help me with grimotika's grave tombstonre puzzle? i'm stuck.

which one is it?

the second one, the one with the rectangle with two arros facing oppisatly with eatch other, you know, the one that says "join

ok so there's this chair thing that spawns where its suppost to be so if you're loading up the level just leave it there but then you need to put lim-lim  in front of the hole on the far left and then equip the bell, that'll turn mil-mil into a ball which makes the dot above the "i"

thank you, and i just realized that there were wodrs at the bottom of the graves and i didn't realize it  DX

how do i do the one you have to creat a skelleto?

I love this game 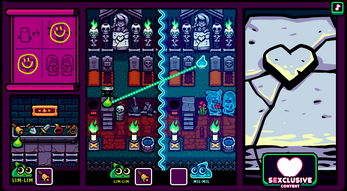 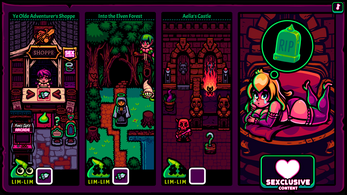